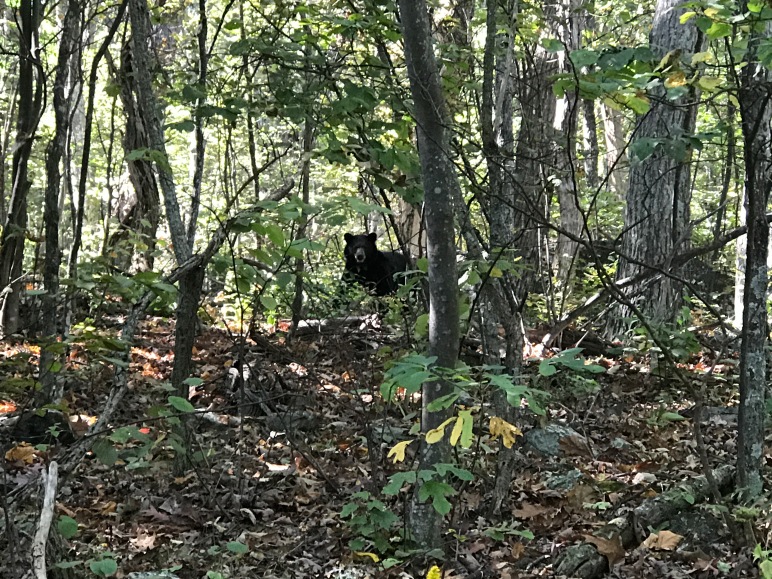 Almost more frightening than seeing a bear is someone telling you they saw a bear. An older guy, older than my dad, who, if you saw on the street, you’d call homeless, but out here in the woods wearing a backpack with a red bandanna decorated black paisley tied around his head, just a hiker. Supposedly, who came around the corner and surprised two bear cubs up a tree. Never saw their mother. He says. But had a sense she was nearby. He tells us this as he is headed in the opposite direction, toward the almost can’t be called a town a few miles behind. Where we ate cheeseburgers and charged our phones and filled two collapsible water-bottles with cheap fizzy gas station wine. Dad and I. This guy is filling our heads with thoughts of bear and I swear I can smell every ounce of that half pound burger I ate called the hiker, ironically, likely pieces of it beneath my fingernails, grease left off in my scant facial hair. Old man hikes on but we really don’t, we’d walked all day and by design were camping close-by, maybe a few dozen yards from the place he treed the cubs.

There used to be a shelter here, but it burned down and all that is left is a giant set of concrete steps and the half buried slab it leaned on. The site isn’t popular. I can tell because of how little walking it takes to gather up a waist high pile of firewood so I can light up these woods right until the buttcrack of bedtime. Dad teases me about it. Less than an hour and a young man comes bee-bopping down the trail buried between two earbuds. He sits on our orphaned steps and talks to us about joining the army at the end of summer. And this trip is one half vacation, one half training. He can’t be in his mid twenties. One of those ultra lightweight backpacks stitched with the word Osprey. He hikes light. Carries very little water. Trusts his legs to get him more. He started further back than we did, and he isn’t done for the night. By his projections, another six miles before dark. His stories are scary-exciting like inheriting land or landing that new job. Red tee. Spiky black hair. Sweat sheened tan skin and built skinny strong. He did not stop to get a burger.

I have to drink most of my wine because my wine bag busted from the carbonation. Dad goes to tent an hour before my firewood is spent and I dirty up a couple pages and watch the flickering darkness for the twinkling of bear eyes or old men who smell like damp tobacco and liberal patchouli. The trees catch hot breath off my tall fire and juggle it between branches, busking for my attention, and I give it to them, two ever-open quarters I flick out from my pocket, like boomerangs, always seem to fly back to me whenever whatever I gave them to is finished.

I’d rather see a bear than hear a story about seeing one.

If I knew it was there in the dark staring back at me licking its lips.
Even that would be easier than waiting.