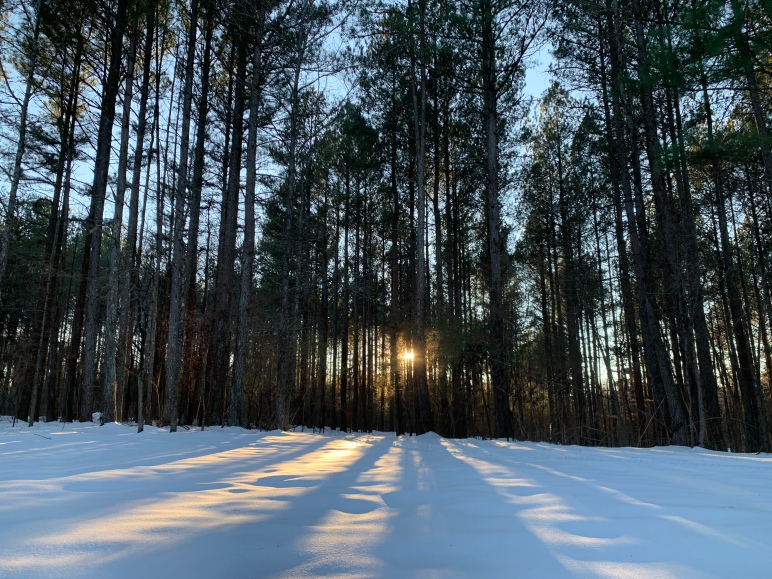 On a clear cold now, with a coat of snow on the shimmering hillsides, the train in town sounds like a truck coming up the road. The moon is bright and round buried behind clouds. But a minute ago it was naked in the woods. Shivering in the snow. Like daylight on a different world, ghastly, ghostly, opaque. Like the moon glimpsed its reflection in the snowshine for the first time and realized it wasn’t beautiful the way it thought it was. But pale, a sickly light no good can come by. A gossipy glow whispering what’s going on in town. The train is. Hear.

Eyes go through windows easier than rocks do. Vision. A cold trickle of steady err. For the eyes are blind to cold. Skin sees cold a mile away. But a clear cold window hoods the body’s hood and skin is blinded by wood stoves.

There are more coyotes in a farmer’s imagination than were ever born in the world. Tonight they circle these woods injured in yipping droves. The instinct to play prey. Mm. Compliments to the chef of camouflage. God overblesses a worthy enemy.

Moonlight is like the water that escapes the body with the blood. It’s the thick semi-translucent plasma that gets called empty space even though it’s heavy and sticky and gelatinous. Moonlight is a ridiculous phrase for the very same sunlight bouncing off a nearby rock that is very likely actually a broken off part of earth. Taking two hundred words to describe how it looks bouncing off snow that is actually regular old rain it just happens to be cold. The way moonlight is in existence, but you can still look through it, ignore it, like it isn’t.

Moonlight is the color of memory.
Staring through a window at three am.
It just occurred to me.